Kobolds & Trench Coats is a two-page tabletop roleplaying game (TTRPG) about a group of Kobolds, their trusty trench coat, and the shenanigans they can get up to.

All these bigger magical creatures and pesky adventurers keep stealing your stuff and you've had it up to your horns with it. Don your magical trench coat and stack on each other's shoulders  to become a perfectly normal, totally human adventurer and exact your whacky vengeance! Search out the finest shinies, the rarest magics, or just look for your stolen stuff with however many friends you can pile in here and still pass for human. Whatever happens, at least you have each other (and more than enough pockets).

Art for Kobolds & Trenchcoats was done by Brighid de Danann. Find more of her amazing work at bridedanann.com or @BriDanann.

Kobolds & Trenchcoats is a hack of Lasers and Feelings by John Harper.

In order to download this game you must purchase it at or above the minimum price of $3.99 USD. You will get access to the following files:

Support this game at or above a special price point to receive something exclusive.

If you can't afford a copy of Kobolds and Trench Coats, feel free to snag a community copy! The world needs Kobold Chaos.

Sales of K&T and tips over the asking price will add some community copies to the pool.

Just a taste of the possibilities:

"Just finished running a game of 'Kobolds & Trenchcoats' for a couple of the Sunday D&D group and a guest.  Thanks @Jon Boyle/ResidentBard (He/They) for a fun few hours.  Sent on a secret mission to infiltrate a local 'city' and recover an unspecified magical item, Taklak, Sniv and Molo (from the feet upwards) spoke to (and knocked out) a local farmer, chatted to someone outside the tavern and Taklak poked their cat (who promptly vanished in disgust at such treatment), stole someone else's staff (which Sniv ate the gem from, which made them invisible), then entered the temple, found some shinies and a plain wooden box with a muffin in it.  They took the shinies and were about to leave when Molo wondered why there was a wooden muffin box on the altar.  It had another muffin in it!  One mad dash across the 'city' square led to a big cloud of smoke and an escape as they bounded along holding the stirrups of a horse as Sniv strew d4s of maiming in their wake. They collected the still dazed farmer and took him back to the camp to be a servant, and discovered they had been sent by Their Majesty - who had dreams of revitalising their community by setting up Kobold Katerers.  As the adventure closed there was a knock at the door, they looked up from the table strewn with papers and dice as my Sunday PC looked in and said "If you're ready, we have things to do".  The characters at the tavern were my Monday D&D group, including Geth and Ash."

So much scope for chaotic shenanigans, and all on just one sheet of paper with one simple mechanic!  A recipe for a fun session for all. 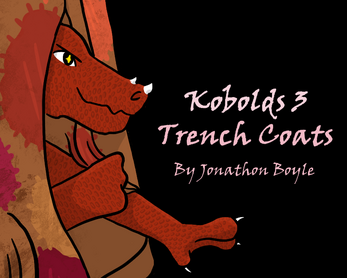 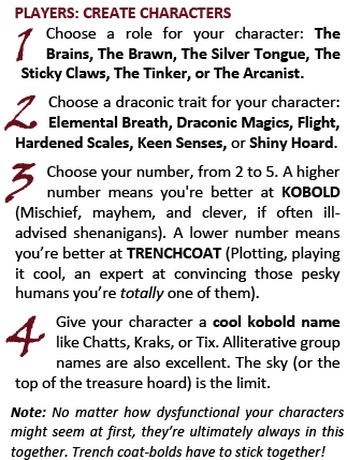 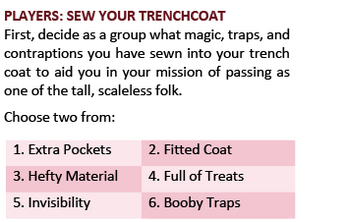 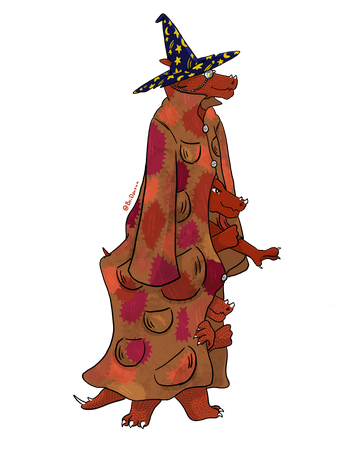